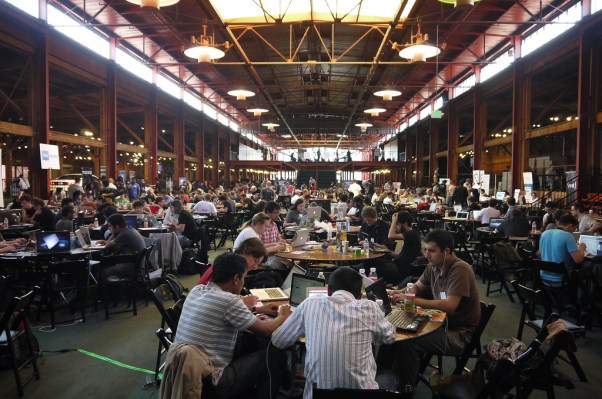 In the face of rising U.S. income inequality and concerns about job loss to automation, some of Silicon Valley’s best-known names including Y Combinator’s Sam Altman have spoken up in favor of a universal basic income that would give people a baseline standard of living in an economy that may not be able to produce enough decently compensated work for everyone.

A mix of technologists, policy wonks and creatives are trying to kickstart a bigger movement around that idea this coming weekend with a Basic Income Createathon.

“Everyone in the country having jobs is not going to make sense anymore because we’re going to have computers and robots doing what we’re doing most of what we’re doing today,” said Jim Pugh, who got a Ph.D in distributed robotics before he worked on the original 2008 Obama campaign. “If you accept that as a premise, what we need to do as a society is not made up of small changes. It’s actually a fairly radical change and basic income seems to be an elegant solution for doing that.”

A basic income is a kind of Social Security system where all citizens or residents get an unconditional amount of money on top of whatever their wages are from elsewhere. It assumes that, above this minimum level of income, people will still be motivated to work for more money or on more meaningful projects.

The Createathon is very deliberately not called a “hackathon,” because Pugh wants to make non-technical folks feel welcome into the fold.

“We are strongly encouraging participating from writers, artists, musicians, videographers and people who might not normally gravitate toward hackathons,” he said. “If your focus is building an app, our hope is that we’ll have some technology projects. But we also hope that people will be working on long-form content. People will be making videos, writing songs, or painting paintings. There can be all sorts of different ways of expressing interest and support for the idea.”

There are some early experiments with cities in the European Union, like in Utrecht, which is starting to give “no strings attached” money to some of its residents. Then there have been studies on unconditional cash transfers in Sub-Saharan Africa through programs like GiveDirectly, which Facebook co-founder Dustin Moskovitz and his wife Cari Tuna recently backed with $25 million after some early tests. Pugh also pointed to an American example with the Alaska Permanent Fund, which was established in 1976 to re-distribute some of the state’s oil revenue to Alaskans in the form of dividends.

Pugh said the point of the Createathon is to build energy for a broader political movement that will advocate for universal basic income and push for small pilots to test the idea out in the United States.

To be fair, not everyone prominent in the tech industry agrees with the premise that there won’t be enough jobs for everyone. Marc Andreessen regularly ridicules this idea on Twitter. But there are still a number of influential folks who are concerned about the 3.5 million truck driving jobs that may be lost to self-driving vehicles, or the millions of factory jobs that might be lost to improved robotics.

Nor does everyone believe that a basic income is the right solution to the problem. MIT professor Andrew McAfee, who raised many concerns about increasing automation in his book, “The Second Machine Age,” favors an expansion of the earned income tax credit over a universal basic income. The earned income tax credit functions like a negative income tax; it’s still tied to whether you work or not. That’s because McAfee still wants a system that incentivizes people to do something, regardless of whatever it is. He argues that people exhibit depression or worse levels of health without some kind of bigger purpose.

Then, of course, institutionally speaking, it’s very hard to remove an entitlement once it is offered. In other countries where there is a clientelistic form of politics with huge swaths of the labor force that are dependent on public sector income, it’s very politically difficult to correct spending and entitlements if broader economic circumstances change.

A movement for a universal basic income would represent a fundamental shift in the way Silicon Valley, and perhaps the U.S., thinks about the value of work and unconditional cash grants. More than thirty years ago, former Californian governor Ronald Reagan was elected U.S. president on campaign speeches that ridiculed mothers and women who abused the welfare system. Under Clinton Administration, welfare reform was centered on getting clientele off the rolls.

Today the thinking is quite different.

Do people need to work for the sake of work, especially if jobs with livable wages are not widely available?

“One of the big hurdles we face is that there’s such an ingrained belief in people that they should work,” Pugh said. “The idea of getting money unconditionally is completely counter to a lot of people’s world views.”